Diversity Spotlight: Marilyn Willrich on the past, present and future of Deaffest

Marilyn Willrich on the past, present and future of Deaffest

In our latest Diversity Spotlight, we catch up with Marilyn Willrich, business owner, Deaf creative and co-founder of the UK’s only Deaf-led TV, film and media festival, Deaffest. With a long-standing career in the Creative Industries, working with leading companies like the BBC and Channel 4, Marilyn highlights the difference between how hearing creatives and Deaf creatives are supported and celebrated.

This is what inspired her and her business partner, Nikki Stratton to launch the biennial Deaffest festival and its counterpart, Cornwall Mini Deaffest. We learn more about how Marilyn’s personal experiences have shaped her work, as well as exploring the highs and lows of running the festival. 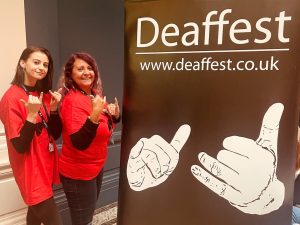 Why did you start Deaffest?

Marilyn: I used to work with the BBC, about 30 years ago and there were a lot of hearing people in the industry, such as TV producers and filmmakers who won BAFTA awards and were celebrated at things like the NTAs. There was a lot of celebration for hearing creatives but there wasn’t that same celebration for Deaf people and their work.

The British Deaf Association used to run a small TV and film awards festival but it’s a charitable organisation so unfortunately, the festival had to stop due to funding cuts. So, myself and Nikki—my business partner—both had extensive knowledge of the film, TV and arts world and we discussed bringing the awards back by starting something similar.

The BDA used to always host theirs in Wolverhampton and that’s where our business was headquartered. We collaborated with the The University of Wolverhampton and the Light House Media Centre to set up Deaffest and it was established 2006. We had the first festival then and it was really successful and its purpose was to specifically celebrate Deaf creatives in the industry in the same way hearing creatives are celebrated.

How have your own personal experiences shaped your professional ambitions?

Marilyn: One of our biggest ambitions when setting up Deaffest was to provide children with role models within the TV and media industry. They need role models, such as ourselves, to show them that these things can be done. It’s important for children to not just have hearing role models because that can be so frustrating, having to have things modified to suit your language use. It can discriminate against them, affect their confidence and then have that knock-on effect.

If Deaf children see things in BSL, in their own language, their first language, they have the creative freedom of not having to worry about translating everything or how to express themselves. If I’d have had that as a child, I probably would have gotten into the film industry earlier.

If I had had those role models when I was younger then I could have potentially either gone into being a child actor and been inspired from a much younger age. The media industry has changed so much over the past 20-30 years, though. I think those role models are now being provided and there’s less negative stigma and stereotyping around being Deaf and using sign language.

What is the biggest challenge about running the festival?

Marilyn: Funding is always an issue and there are always hurdles around that. All of the application forms are in English, which is stressful for us as a Deaf-led organisation because BSL is a language of its own and the grammatical structure and syntax aren’t always the same. Often, we have to hire BSL interpreters so that we can understand the English and all the jargon terms used on a deeper level.

I think a lot of funders forget or don’t know that English is our second language and they assume everyone is just the same and that everyone’s needs are the same. They don’t seem to understand or appreciate the communication barriers in terms of accessibility for us. It’s hugely frustrating to navigate, so that’s a big con. 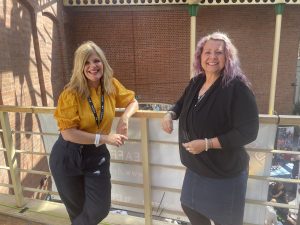 What have been some of your greatest achievements so far with the festival?

Marilyn: We had a Deaf band come all the way over from America, which was extremely unique. All the band members—the drummers, the guitarists—were all completely Deaf. They were called Beethoven’s Nightmare and I was in awe seeing a live Deaf band on the stage. That was a really proud moment for us. And of course, all of the other amazing performers that we’ve been proud to have at Deaffest as well.

A lot of organisations are starting to sponsor Deaffest and I’m really proud of the recognition we’ve started to achieve in recent years. I’m incredibly proud to have had the late Richard Griffiths, who is a very well-known actor, as a patron of Deaffest. Sadly, he passed away quite a few years ago but he was replaced by actress, Rachel Shenton as our patron, who also signs. I’m also really proud to have renowned Deaf comedian, Danny Murphy as an ambassador of Deaffest.

I’m also just so proud of all the individuals who have been involved in the festival and had a platform within Deaffest to showcase their work, showcase their creativity, and to see them all flourishing. It has been amazing to see.

What do you think has made the festival such a success?

Marilyn: It really has grown over the years. We’ve just had our 14th festival and our 10th anniversary as well, which was a four-day event that included Deaf children from Deaf schools to encourage them specifically. It provided young Deaf individuals with their own platform and opportunity to work within the film and art industries. I think a huge factor in our success over the years is having children like them coming back as young people and then returning again as adults. That has been amazing.

It has also been amazing working in collaboration with all these different festivals internationally and to have the BFI and the Arts Council provide us with recognition and support in whatever way possible. Increasing our recognition and sponsorship over the years has really helped us become more and more successful.

Marilyn: So, the plan for 2023… Some things are secret and we’ll have to reveal them in the new year, unfortunately! But, we have booked a venue, we’ve got some of the artists secured and we’ll be applying for funding after Christmas. Hopefully we’ll secure that funding and secure some sponsors.

We haven’t really been very popular with sponsors for Cornwall Mini Deaffest, unfortunately. We’ve had some sponsorship from Devon and Cornwall Police as they sponsored our second festival and hopefully they will for our third. SignVideo and the BSL Zone have provided us with some small sponsorship too—but we would like to secure more sponsors in the future too. Hopefully, Cornwall Mini Deaffest will gain more sponsors as it gains more recognition.

To find out more about Deaffest or to stay up to date with the latest news and updates, go to www.deaffest.co.uk.