SCREENSHOT Media is one of the newest, and most exciting, members of the Creative Growth Finance investment portfolio. Founded by Shira Jeczmien in 2018, when she was in her mid-twenties, the company specialises in the production of short-form content that is tightly tailored to a Gen Z audience. Data-driven and savvy, Shira has built a company whose impressive growth is thanks both to her willingness to let the audience speak for itself (around 70% of the staff are aged 21-24) and to her ability for identifying, and jumping on, trends.

We caught up with Shira to find out how she built SCREENSHOT Media and what the investment from Creative UK means for her company. 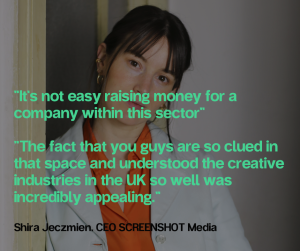 Creative UK: Can you tell us a bit about what SCREENSHOT Media does and how it got started?

Shira Jeczmien: SCREENSHOT Media is a next generation media company. We own and operate our current hero brand, which is SCREENSHOT which, as a publisher, is very much focused on 18- to 24-year-olds, with content around current affairs, news and entertainment that is specifically tailored to that demographic.

That’s the media side. And off the back of that, last year we launched our agency arm, which is a full-service agency working with blue chip brands to create content and campaigns that target that younger demographic.

What kind of campaigns do you create for your clients?

SJ: Our campaigns span across all sorts of things. They usually have a focus on Gen Z, 18- to 24-year-olds. We oftentimes develop campaigns that might already exist for a brand, but then we translate it to socials specifically. This can look like Tik Tok campaigns and Instagram campaigns, usually working with a lot of talent, including brands like Toms, Wagamama, Huawei and Calvin Klein.

Why and when did you set up Screenshot?

SJ: We had a very unorthodox way of starting as a company. There’s the short story that I can tell, which is that we founded four years ago when I was still working as a consultant for an app working on their copy. But in reality it’s been going on for, maybe five years, as a blog that I started very early on. A Creative Director, Sofia joined me and we used to write short form content around topics that we didn’t see getting covered in a fun and approachable way anywhere else.

I was coming into our then studio in Dalston, maybe twice a week, and then working on the side funnelling all the money that I was making into bringing on interns to start writing for us.

We then got a very small friends and family angel investment of £30k, I quit my job and we built this company.

What sort of topics were you covering?

SJ: We started by looking at tech and social media trends and what that means about culture and politics and it just evolved from there. But I think the ethos always stays the same, which is: how can we tell really interesting stories and really important stories which that demographic misses because they’re not written in ways that are catered to them?

And then we found that the more youth-focused publishers like Vice, Complex, etc maybe focused a little too much on very niche subcultures and didn’t really look at politics or tech or social media or entertainment in the way that we did.

So, you were covering content that wasn’t getting covered in a way that worked for your audience – that 18 to 24-year-old demographic?

SJ: Yeah, exactly. So, you know, at the time we’d be like, what does AI mean for you or what does this new Instagram feature really mean for development of culture? Today our content is culture-breaking news but very much from what we would call a SCREENSHOT angle, which is short for easy-to-digest. Our articles are no longer than 700 words, everything is bitesize. And one thing that we realized very early on was, there’s really no point in trying to bring people to a platform that they’re not using.

We really look at each platform as its own unique entity. So whoever reads SCREENSHOT on the website might not even know that we exist on TikTok and vice versa. For us, it really is, if we can grab an audience on a platform for those three minutes that they’re using it, that’s the moment that we will tell a story to them. And we have a way that we create that across the board.

How have you found growing your audience?

SJ: One thing that we’ve been doing very much of over the last 12 months is really, really pushing to grow that age group within our audience. So the difference from last 12 months to the previous 12 months is that we grew that demographic by another 35% across the channels. So really making sure that, you know, obviously we can say we’re a next gen media company, but we’ve got to look at our numbers and make sure we actually speak into that demographic.

Are there particular challenges in running a business with that age range as your audience?

SJ: I guess you have to make sure that the people we work with are in touch because it’s easy to pull out of touch and we all get older. So yeah, absolutely. We hire very young people to work for us. And these are young graduates; they might have done three to six months in a placement. They might be fresh out of uni or have been working for a while and didn’t go to uni. We really only care if they’ve got what we are looking for, which is just to live and breathe that content.

You said that you got some angel investment quite early on. How did you come to get that investment?

SJ: The investor was someone I know – the founder of an organization called The Fair Planet, a not-for-profit news publisher run by a high-net-worth individual. We spoke and he gave us £30k very early on, which was great. In the grand scheme of things it’s really not a lot of money, but at the time it was and it allowed us to build what we built. Super lean, very, very lean, that £30k probably lasted us six or seven months. So you can imagine, we were not spending a lot of money at the time.

And how did you then come to get investment through our Creative Growth Finance fund?

SJ: With Creative UK, our accountants had mentioned you guys, but then you kept coming up because we are in the middle of a fundraising round and we’ve been speaking with a lot of investors. Edge Investment was one of them. They mentioned you guys and said that you were great. And then we booked a meeting and had a chat with Tim and Matt [Tim Evans, Head of Investment and Matt Browning, Investment Manager].

Matt was immediately quite excited by it and we were really just testing routes at the time. It wasn’t something that we knew we wanted, but as our conversations developed and as Matt told me a little bit more about Creative UK and I got to know how you guys work it became more and more appealing to us and then we went for it.

What was appealing about Creative UK as an investor?

SJ: Obviously your focus in creative industries; I’m sure that this is something that all of your portfolio companies say again and again, but it’s not easy raising money for a company within this sector and especially not a media company. I think there’s an age-old sort of stigma around media that it’s a really high-risk business, and it is. But at the same time, it’s also really scalable if you do it right. And there are quite amazing media companies that have popped up in the last ten years. And so I think just the fact that you guys are so clued in that space and understand the creative industries in the UK so well was incredibly appealing.

And, from my conversation with Matt, I really could tell that he knew what we were talking about. It was also in the middle of a raise speaking to a lot of investors who really have no idea what we do or how we do it and explaining why it’s scalable and why it can be a really good investment opportunity. And Matt just sort of got it from the get go, which was a real vote of confidence.

Your boards, the support and connections, also just the way that the fund is structured. I don’t think it’s something that we would have in any way considered from a bank. But I think the way that you guys work and the fact that Matt’s becoming a board observer and also that we can very much lean on him for advice – we can already see the benefits of that.

Looking back on your business journey so far, is there anything that you would do differently now?

SJ: Yeah, so many things. I mean, we’re in a great place, but none of us knew what we were doing at all. There was really no background and none of us came from media and yeah, there’s a lot of things that we would do differently, but also I wouldn’t really change where we are at the moment.

We’re very proud of what we’ve achieved and where we’ve gotten to. And, you know, sometimes it’s a positive and a plus not to know the industry, so that you come in a bit naive and blind and maybe do things that are a bit more outside of the box.

But when we first started, I think we had an idea of being a bit more like a culture magazine. I would have definitely dropped that from the get-go and focussed on digital channels and specifically channels that generate revenue and really crack that.

What’s on the horizon for Screenshot?

SJ: The goal is to launch new brands that are more specific. So potentially a gaming brand, a sports brand, a food brand, a beauty brand. But what we’re doing is we’re using SCREENSHOT at the moment to just test that and see how it works.

Sports is a big focus for us. We really are working to understand what that can be like. Sports is a huge opportunity just generally, and there really aren’t a lot of next gen media companies tackling sports. So, if we can get a slice of that cake while making it ‘SCREENSHOT’ or making it really fresh, really young, that’s a real big focus for us.