‘This is the future of sports media,’ Carsten Thode on How Aphetor is Revolutionising Entertainment Sponsorship Campaigns

Words and interview by Simon Bland

If there’s one thing all brands want, it’s an authentic way to access audiences. Meanwhile, content creators are constantly on the look out for new and exciting ways to generate media and extend their digital reach. If only there was a middle ground that suited both parties while helping everyone get exactly what they’re after…

Enter Aphetor: the innovative new concept that brings big brands, top influencers and content hungry audiences together whilst pleasing all three at the same time. It’s a new tool developed in reaction to the ever-changing ways in which viewers digest live media, and according to company founder Carsten Thode, it’s set to change the way we digest digital entertainment.

“My background is in traditional sports,” says Thode, speaking to us during the early stages of his time on our Creative Enterprise: Evolve scheme. “The argument for any sponsorship campaign is to try and align yourself with an audience through their passion points and I was working with brands trying to reach an audience through sport.”

Throughout his career, Thode has orchestrated sponsorship campaigns for big-name clients like Formula One and Manchester United, before heading up a company that partnered with equally recognisable names such as Under Armour and Capital One. During this time he helped each connect authentically with new and existing audiences but quickly began noticing some interesting changes in the way consumers were interacting with digital media.

“Brands kept coming to us trying to connect with young audiences but what was interesting was that the typical playbook was no longer working,” explains Thode. “What became clear was an interesting innovator’s dilemma. Traditionally, the sports industry’s entire ecosystem is driven mainly by live broadcasts and the money broadcasters pay for exclusive broadcast rights. That model isn’t going anywhere, and if anything is getting stronger because as media becomes more fragmented, live sport is the only thing that aggregates an audience on TV nowadays so it’s becoming even more important and valuable to the broadcasters even though the audiences are declining as younger generations switch off,” he adds. “The problem is young audiences don’t consume media that way anymore.”

It’s a very pertinent issue. As Thode explains, a new generation of consumers have come to expect more from their digital content – and how they access it. “They’re not watching a five-set tennis match, a five-day cricket match or even a 90-minute football match – they’re used to completely different content formats, like bitesize, on-the-go social clips that they can share with their friends,” he says. “Rather than sitting back and watching, their role is much more active and typically involves creating content, memes or participating in challenges.” 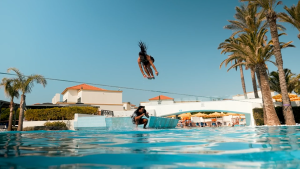 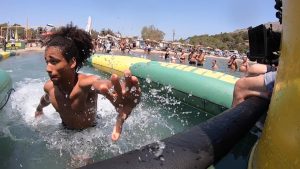 Instead of traditional broadcasters delivering content directly to viewers, the modern-day entertainment fan is far more likely to access their media via their favourite influencer who likewise is looking for innovative and exciting ways to generate new content. With this sector clearly in flux, Thode came up with an alternative model: what if you provided influencers with everything they needed to make sparkling content at showcase events, where you could authentically integrate relevant brands into the event itself, allowing their products to show up in front of new potential customers?

“Aphetor is about creating a model that fits into the media consumption patterns and expectations of young fans,” says Thode. “What it does is provide the context through which these products and brands can be consumed and utilized in a way that’s more authentic.” Forget clearly sponsored influencer ads or clumsy brand partnerships devoid of passion. Instead, Aphetor brings advertising experiences to life in a way that naturally generates authentic moments, allowing brands to showcase their wares via a new form of promotion.

“Our most recent event was in Rhodes last year and our brand partner was the snack bar company Nature Valley,” recalls Thode, detailing the company’s 2021 Aphetor Games that invited a host of top influencers to take part in a series of sponsored challenges. “The company compared it to doing a normal influencer marketing campaign and it performed three times better. It gives creators a huge number of opportunities to create content that’s tricky for them to make otherwise,” he reasons, pointing to the games’ array of adrenaline-fuelled events, each screaming out to become an influencer’s latest social media moment. Plus, the loose nature of the event guarantees that all-important authenticity: “If these guys are about to jump off a cliff, it makes sense that they’re going to need a snack bar beforehand,” laughs Thode. “I think that’s the secret to Aphetor’s success.”

The end result is something that’s hugely beneficial for both brands and the influencers taking part, leaving both with plenty of valuable take aways. “What we deliver to brands is a huge amount of content they can use on their channels which isn’t easy to get their hands on and often expensive. Nature Valley make snack bars, they don’t make social content – so if they want content for their Instagram, TikTok or Youtube pages, they typically have to pay an agency to create something that looks like an advert. This solves that problem,” submits Thode. “Meanwhile, content creators are in awesome locations, collaborating with other cool creators and doing epic things, so of course their content performs better. One of the best pieces of feedback we always get is how amazing it is for them to meet and collaborate with other creators – and while they’re all appearing in each others videos, brands get all the views.”

It’s this early success that has led them to Enterprise: Evolve, a support and mentorship programme that helps high-end screen-sector businesses punch through to the next level. Working alongside their own dedicated industry mentor, participating companies get exclusive advise and insight that helps them grow quicker and prepare for successfully raising investor finance. “The trick now is to scale,” admits Thode, explaining why he chose to enrol Aphetor into the scheme. “We’ve done this and know it works but scaling is going to take a lot of partnerships. We can’t do everything ourselves,” he adds. “We eventually want to get to a point where we’re doing 20 Aphetor events a year. In order to scale, we not only need investment but also the right partnerships and we’re hoping this programme can help introduce us to both.”

What’s more, as a concept that’s breaking new ground in terms of how audiences interact with digital entertainment, it’s also something that embodies the forward-thinking ethos of the creative sector itself. “For us, this is the future of sports media. It’s a new way of thinking about creating and distributing content and we believe that’s the kind of thing Creative UK should be championing,” suggests Thode. “I think this model will take over sport and entertainment. It’s at the intersection of gaming, TV and sport so it blurs a lot of those lines. It’s early days, but I think Creative UK can definitely introduce us to investors, and the mentors involved all have the right experience to help us,” he smiles. “We’re looking forward to seeing what we get out of it.”